After seeing all of the performances at the 20th ''Gavella Evenings'', the appraisal committee comprising of: Vanja Drach (chairman), Sibila Petlevski, Dora Ruždjak Podolski, Željka Turčinović and Tomislav Zajec (members) has narrowed down their selection to three productions:

After careful consideration, the appraisal committee has decided that the award for the best performance at the 20th ''Gavella Evenings'' should go the Croatian National Theatre in Osijek for ''Cyrano de Bergerac'', directed by Zlatko Sviben, which had its premiere on May 11, 2005 in Osijek.

This production is a display of stage movement, scenery and lighting components minutially performed and professionally put together, which is a characteristic of theatre professionalism that is rarely seen in Croatia today. A well-tuned ensemble has woven an impressive tapestry according to Sviben's design. The ease of reading on the stage, which is offered by Sviben's directing, the rhapsodic harmony of elements in the service of creating the atmosphere – are director's means that today seem refreshing, although, in themselves, they posess characteristics of an anachronism. The successful adjustment of the text based on the translation by Milan Dimović and Ivan Kušan received its dramaturgical back-up in the integration of linguistic variants in places within the play where this integration could produce a spark of humour.

Krešimir Mikić as Cyrano proved that he is a great actor who leads the coordinated ensemble, whose naturality of speech and the constant focus on the content underneath the rethoric form makes this performance a highly-aesthetic theatrical act. 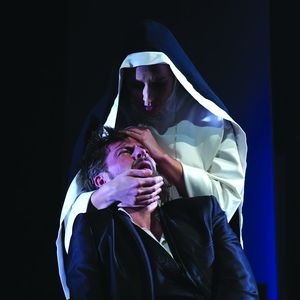